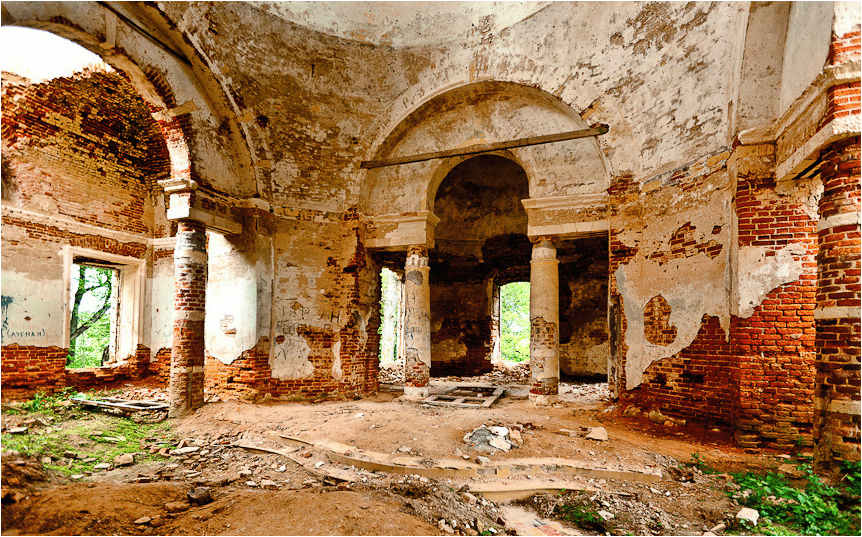 The heart grieves and is glad that life is, strangely,
Vast…
Ivan Bunin, “Youth”

“Army Group Centre opened the Taifun offensive today at 05:30” writes Generaloberst Franz Halder in his Kriegstagebuch entry for October 2, 1941. “Taifun has started with smashing force and is making excellent progress.”

Znamenskaya Church.
Another storm closing in on its roofless spaces--
oratorios of thunder, a descant of rain.

Hoepner’s Fourth Panzer Group and Kluge’s Fourth Army are on the move in coordination with Reinhardt’s Third Panzer Group supported by elements of Strauss’s Ninth Army. They roll up the Russian defenders and close their encirclement at Vyazma, trapping four Soviet armies. But the weather changes— the rasputitsa— and the attack slows to a crawl.

Summer squall--
in the lee of a ruined wall,
a stand of white birches.

If you’re driving, take the M10 from Moscow to Klin then the A-108 from Klin
south toward Volokolamsk to Nidol village. Take the turn for Vertkovo. You’ll know
you’re headed in the right direction when the blacktop ends and turns into a dirt track
by the big barn in the village. The roads are usually in good shape this time of year,
so you should be OK. Soymonovo is the next tiny settlement on your way. Find that
and if you keep on for another km or so, you should be able to see the church.
Sometimes you can drive right up to it, but it’s always an easy walk in and out.

Stalin recalls Zhukov to Moscow. He takes charge of the city’s defense in the nick of time. He makes brilliant adjustments. On October 13, Army Group Center resumes its assault and comes within sight of Moscow on October 16 but can go no further. 2000 sorties by Luftflotte 2 cannot wear down determined Soviet resistance. Guderian, Heinrici and the rest have also met with stiffened opposition in the southern sectors— tanks, fresh infantry divisions, and a recovering air force arm— and Tula holds.

the timescale of this wild taiga
to trouble us.

How things come and go--
each inevitable contour.

Now, just like that, all facts of life topped off with immaculate light.
A temporal canon crowds an hour with its grace notes to decay.

The great Teplovo estate was founded by Pyotyr Alexandreovich Soymonov,
Senator and Privy Councilor to Catherine the Great. The church was built in 1797.
Its design, strictly embodying the Vitruvian Virtues, is usually attributed to Nikolay
Alexandrovich Lvov. Most of the other main buildings were constructed at about the
same time. The church’s interior appointments and ornaments were removed by the
Soviets after the 1917 Revolution. The church was abandoned in 1937. The entire
estate and its dependent village were completely destroyed in 1941. The church ruin
is all that remains.

So, what to make of it—Bolshevik graffiti, spent brass,
standing water, fox tracks. Of larkspur, mint,
these banks of wild chamomile.

Summer.           Breathing space.
All the little histories
working themselves out.

By December 2, for all practical purposes Operation Typhoon is over. Barbarossa has failed and the weakened Wehrmacht assumes defensive postures along the battle line.

Plastered brick, white stone, steeply gabled Tuscan porticos, some partly fallen away.
Graceful arches. Domes and towers. Elaborate bronze poppy heads nearly intact. On
an empty doorframe, twisted hinges, a padlock in a bent hasp. Almost all of the interior
spoiled of course, but a few faded grisaille accents. In the nave, the chain that supported
the horos.

Just one more place with a short, dreary history,
an abolished context. But who could have guessed at this,
this endless winding down?

On December 5, Zhukov launches his counter-stroke. His attack drives the German army back 150 miles. The Battle of Moscow costs the Reich 174,000 killed, wounded and captured or missing in 14 weeks. Soviet losses are more than 650,000.

A time for every purpose,
but darkness in the corners.

The Pokollonaya Hill exhibits in the Memorial to the Great Patriotic War – all those
artillery pieces and armored vehicles should give you something to think about.
The State Museum of the Defense of Moscow is worth a stop too, if you haven’t been
there already.

Must be it’s the same all over— you go here, you go there,
you do this, you do that, something happens or it doesn’t.

Like the light of afternoon,
thrushes’ songs—their fresh ecstasies.

All the old controversies have worn themselves down to nothing.

Halder is implicated in von Stauffenberg’s failed coupe d’état and falls from grace. He spends the last weeks of the war in Dachau. During the final collapse of the Third Reich, he is rescued from the SS by Heer troopers.

After his rehabilitation and release from Allied custody, Halder helped to de-Nazify and reconstitute the post-war Bundeswehr. He died without fanfare in Bavaria in 1972.

Zhukov forces the Germans back, finally encircling Berlin. On behalf of the Soviet Union, he accepts Germany’s unconditional surrender in May 1945. Stalin, fearing his general’s unprecedented popularity, transfers the Victory Marshal to obscure postings far from the limelight. Briefly restored to favor after Stalin’s death, Zhukov quarrels with Khrushchev and is dismissed.

In his retirement, Zhukov spent much time fishing—his rod and tackle, gifts from Eisenhower. He died of a stroke in 1974. On the 100th anniversary of his birth, the Orthodox Church conducted the panikhida at his gravesite in the Kremlin Wall Necropolis.

Oranta.
These orderly colors of a rainbow--

All natural fulfillments--
red brick rubble, the season’s echelons of clouds…
Each one’s a testament, a practical gospel.

A quiet place now. Elsewhere, of course, new disputes are brewing, but here, today,
right this minute, only a summer breeze riffling broad expanses of grass, stirring these
hardy trees, making the soft noises a light wind makes when it meets resistance. The sky
doing what the sky does. And this old church facing its slow-motion apocalypse out here
in the middle of nowhere. In a spot like this, the heart of one of those blank spaces on
the map where nothing is worth a name, the seasons set the pace for things. It might be
good to keep that in mind.

July 31st,
a blue moon.
The clear arrangement of everything.

Each breath is blunt prophecy— instruction in common wisdom. And the proverb— it’s
so plain and simple nobody gets it wrong.

Znamenskaya Church--
warmed by sunlight through the broken
dome,
a cat skull.